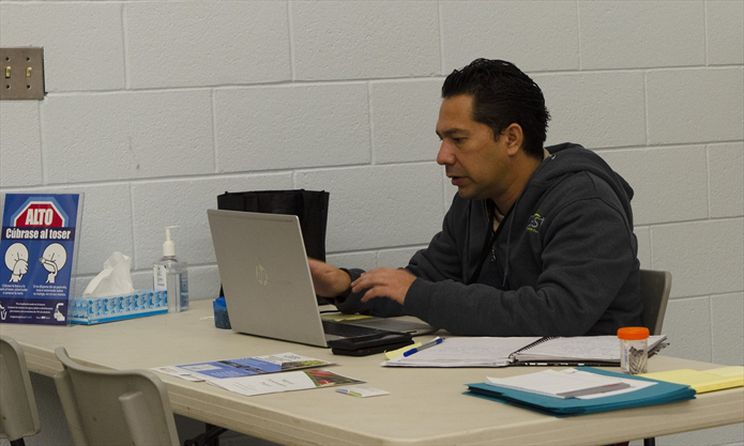 On a cold and dreary late winter day, it didn’t seem like the time of year that any migrant farmworkers would need the support of Quest Community Health Centre. Most people in Niagara probably thought they had all returned to their home countries.

Nevertheless, Moises Vasquez was in the community hall at St. John’s Church in Jordan, ready to help anyone who came in search of assistance. It’s a partnership between Quest and the Niagara Migrant Farmworkers Project that seeks to ensure this vital population is healthy, well fed and clothed.

And now, it’s offered year-round to provide support to the smaller group of workers who remain in Canada during the winter months.

So far, we’ve seen between 80 to 100 seasonal workers, but it is beyond that,” said Vasquez, program co-ordinator. For many of those workers, Vasquez and his team will conduct extensive follow-up.

“We also accompany clients to specialist appointments to help them to navigate the system.”

“Because of the language barrier or the lack of understanding of the Canadian health care system, the follow up is (often) missing.”

Vasquez said they’ll even continue their follow-up after the worker leaves Niagara, ensuring that when they return to their home country they’re still looked after.

Each spring Niagara welcomes thousands of migrant farmworkers to the region. They provide crucial labour for the peninsula’s tender fruit farms and vineyards. Many come through the Seasonal Agricultural Worker Program, however, others arrive through other programs or work visas. Some farms and greenhouses also utilize the labour during the winter months, meaning a significant contingent of workers remain in Niagara throughout the year.

Father Antonio Illas, who runs the Migrant Farmworker Project, said they don’t discriminate and are here to help any migrant farmworker, no matter when they arrive or through which program.

“And in this pilot project that we have, not only are you getting the health care part covered, you’re also getting food security because we would provide them an ethnic grocery bag…with the same visit, we’re addressing food security and health care,” he said.